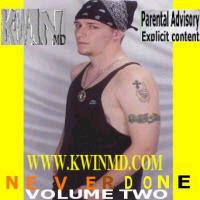 This ablum was put out not long after Volume One & like the first one it has songs from post the PREQUAL era along with some of the songs from "The Nutcrackka" that were not on the 1st one. It had a mix similar to the first one. Between Volumes 1 & 2, many of the songs that were on 1 & 2 are on the "Boilahmaker Sippah" album. The reason why so many albums came out in the Post Prequal Era with similar songs is......"The Nutcrackka" was never really released by Mad Flavor Ent, the bootlegs that leaked the street were it, the "Never Done" (Volumes 1 & 2) were put out online on the old kwinmd.com through the mp3.com/kwinmd distributor which (that owner sold to today's owner of mp3.com which does not cator to unsigned artists in the same way). When mp3 sold the site, the last of only about 10 copies for each album were shipped back to Kwin from the old owner of MP3 in California. Kwin sold the last ones on the street and these "Never Done" albums are collector's items that are very rare...

So the music is used again on the "Boilahmaker Sippah" album, which is availible to download or buy on CD at www.mckomandoni.com and this album "Never Done Volume 2" is unlike the first Volume in that we can not show you a rare page from Kwinmd.com about it. We do have a page that we were putting together for mckomandoni.com that never made it on the site yet, with a picture of the CD cover of "Never Done Volume Two".... The CD Cover of Garageband Records release with Dream Aka Kameil Madison on track 1 & Kwin MD featuring Shallow & Bodacious on track 2 is also on this page....

Before this post is over we can now take a look at every Kwin MD CD that is a collector's item and only one of them is still in Circulation....