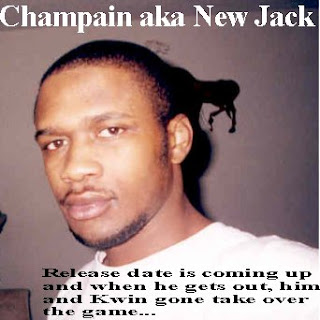 The Making of this song was a nice backround story itself.

Kwin had been living in Virninia for about a year since moving from Philly in 2000....His 3rd move to VA...

A FULL YEAR FROM THAT MOVE FROM PHILLY TO VIRGINIA CHAMPAIN AND KWIN WERE VERY CLOSE STILL.

Kwin used to drive up to Philly like 3 weekends a month to visit. His Girlfriend still lived there, his peoples, and CHAMPAIN WAS LIVING THERE AT THAT TIME.

When Kwin 1st Collaborated with Shallow in the year 2000, he went to Philly to play the music FOR CHAMPAIN, and CHAMPAIN loved it, he heard "WE CAN'T WHAT", "MONEY", "I SEEN ENOUGH", and "MICROPHONE SOLO".

"Microphone Solo" wasn't new to Pain because Kwin Had Recorded some of those lyrics in 1999 with Splash City (GERMANTOWN) while Pain was in the studio and after words too....The Shallow version of this song and the other Shallow Produced Songs were why Pain was so impressed and felt as though he had to make a trip to Virginia and meet Shallow.

They Drove down from Philly, they recorded many songs and "DECOMPOSE" was one of them.

1 Year or so after this was recorded, CHAMPAIN moved down to his original home town Jacksonville, Fla.

He has been living in Florida ever since. Kwin and Him still keep in touch. He has changed his name to NEW JACK and has a record label affliations.

Both MCs voices are the hook.

Mad Flavor Ent. signed Kwin MD and had the rights to this song.

The Contact was void so APG FORX OWNS THE SONG RIGHTS.

Champain in The City of Richmond, with Kwin MD and Shallow aka Nvisible Beats