The 10th edition of The Collector's item 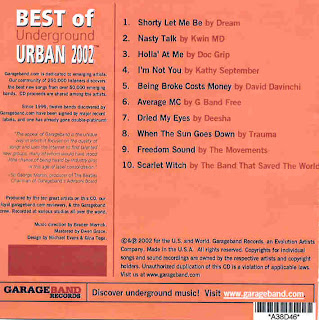 "Scarlet Witch" is on this band's garageband profile.

Formed in 1996, the Band That Saved the World is determined to present an entertaining, lively show of original music. Blending such influences as rock, funk, soul, and pop, the band delivers a surprising mix of danceable, eclectic tunes that are designed to make you groove. "For years, the Band That Saved the World has been known for providing an extra-fun evening of entertainment, guaranteed. With rump-shaking rhythms, Shaft-era chicken-scratch guitar, horny horns that flitter and buzz like bees and frontman Shannon Savoie's ringmaster theatrics, the Lawrence(KS)-based octet definitely knows how to deliver the live goods." - Geoff Harkness (The Pitch, May 2002). As well as entertaining crowds in club scenes from Boulder to Chicago, the band has frenzied a crowd of 8,000 in Belfort, France, when closing the French International Music Festival in 1999. They have also opened for such established acts as the Moody Blues and Lauryn Hill, as well as Liquid Soul and The Urge. In addition to countless live releases, TBTSTW has made two self-produced, full-length albums. The first, Struggle To Chill, with its hip grooves, thoughtful lyrics, and dreamy music washes called "soups", showed that the band could be both eclectic and accessible. Their most recent release, Changes, shows that this talented young band can go wherever it wishes with ease and sincerity, and illustrates that they can write toe-tapping, hip-shaking melodies that you'll be singing to yourself the next day. Focused on creating new music for a new generation, yet incorporating seamless references to classic styles, TBTSTW is destined to turn more and more ears to what they call "grassroots, funky, American, rock-n-roll."