Virginia Beach - August of 2000, The Story behind the picture: 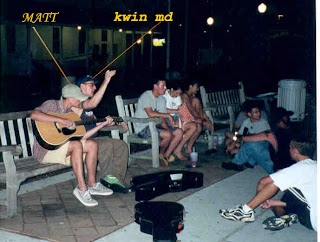 It was the summer of 2000. "Step into my Office..." had not even come out yet. Kwin MD's brother had a old friend who was originally from Virginia but recently moved to Atlanta, come visit for a few weeks. This guy had learned how to play guitar pretty good and braught his accustic with him to the beach. His name was Matt. He and Kwin began to freestyle together. Matt would keep a pace rhythm on the guitar of steady chords and Kwin was flowing to the guitar. People stopped walking on the boardwalk to listen. They decided to open the guitar case for tips. They both stayed there on the Boardwalk mostly all night long just freestyling....

The website was kwinmd.com back then not http://www.mckomandoni.com/ but this picture and story behind it never made it to that website. In November of 2000 (a few months after this day/picture) the first Kwin MD CD was out: "Step in my Office..." but the picture on the back of that CD with the list of tracks was of Kwin & his ex-girl friend (not too hip hop related)...The fact is, this picture we have today from August of 2000 would have been on the back of that CD if Kwin even knew it existed.

Like said above, Matt was Kwin's brother's friend, and Kwin's brother was who had this picture the whole time. Kwin forgot about this day for the most part. Thanksgiving 2007, Kwin went down to visit his brother in Baltimore, MD and saw this picture. He asked his brother if he could have it. Well the answer was obvious, so here it is.

You can see some people who sat down on the boardwalk to listen, you can see Kwin's hand up while he is flowing. It was a fun night. Collabs are fun whether it's a 1 time guitar & flow performance or your traditional recording studio with a featured MC.

Kwin met Shallow in April of that year (2000) and recorded about 4 songs or so with Shallow before this picture was taken. Champain still lived in Philly. It was 1 year after Kwin finished High School, his brother & Matt were still in High School. Kwin had just started to put songs on Garageband.com back then. It was before the RINX beef on the BBS, before Kwin met PL, before Shallow met Degrees of Realness or Shallow was Shallow (before he change his name). It was before Kwin met Metaphysiks. This was right in the beginning of Kwin MD's career as a MC....