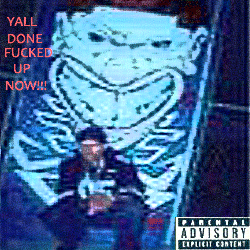 It's funny that Rick Ross came out after we made our song "Bosses" because in the hook we say "Big Original Bosses"
We like Bruce Springstein, the Original Bosses.
We don't say Boss on every song either.
We don't have to convince ourselves of it.
This picture is of a new album coming out on 4-8-08
Called "Yall done Fucked Up Now" by Omega Redd.
It will be availible by download for $3.99
Oh yes, we did try very hard to have Damon Williams, Jenice Armstrong, or Jonathan Takiff
write about today's release by Common Ground "Golden Land"...
Jenice said she doesn't do music. She recommended Damon Williams (who we never got in touch with) but Mr. Takiff did get a copy of the album on Friday (Before it came out) and this was what we included in the envolope with the CD:
Common Ground Bio- 3 Artists make up Common Ground. Omega Redd,
Va'Les & McKoman Doni. All 3 artists had a solo career in music before forming a
larger group called the S.O.A.z...The S.O.A.z is a group of artists who own the rights
to their own music contributions. Publishing, Royalty, and promotions all get taken
by record labels and given artists a small percent. Any "Self Owned Artist" gets 100%
of the rights to all money earned for any song of their. In the past, the Common Ground
name was said in lyrics on S.O.A.z albums. Since 2003, these 3 artists made music
together, this will be the first album to come out under the Common Ground Name.
These are the 3 founding members of the S.O.A.z
"Golden Land" is being released online 3-11-08. You can walk into any
record store that has Super-D distribition and make an order for the McKoman Doni
"Boilahmaker Sippah" album. This album, "Golden Land" is coming out online only
at www.mckomandoni.com
There are 2 ways to get this album, For FREE by voting in a poll online in a
package deal of 2 FREE CDs for your vote; or buy the download version for $4.99...
To Vote is FREE, to hear the 2 Songs and figure out which one you like better is free,
we pay the mailman! The FREE CD we mail out has a Bonus track making the # of songs
22. The Download Version only has 21.
Every Month the S.O.A.z release a new song on Garageband Records called
the "S.O.A.z flavor of the Month". The last poll got only 6 votes, but it decided the
March 2008, "S.O.A.z flavor of the Month". This poll now, decided the JUNE 2008
edition of "S.O.A.z flavor of the Month".
The "Golden Land" album focuses on the inprovisation aspect of Hip Hop.
Most of the Lyrics were not written, they were freestyle. On track #20 "alway's daydreamin' (ohio
mix)", made by B.I.P. (Black Irish Productions: Va'Les & McKoman Doni). Va'Les
plays the Organ and the Bass Guitar was added at Blue Moon in Columbus, OH...
On Track # 5 "Pedals" Va'Les sings R & B style. Track # 17 "You Know I Know" was
recorded in front of a Live audience at Champayne Cafe on Chelton Ave in Germantown.
There were a few songs on this album that were written. Anyone who lives in
the Philadelphia area should appreciate the written lyrics in # 8 "Cream Cheese"
because the message is about how people who use guns think their "SO TOUGH"
with a gun killing someone. This song takes an unusually approach to the senseless
violance in the community and mocks the people who shoot guns instead of fighting
fist fights and so on.
The "Golden Land" album does have explicit lyrics. The name of the album
comes from the era of Hip Hop it fits in with most. The Golden Era of Hip Hop
(1980-1997) was when Rap had a message, KRS-1 & Rakim were popular, Live
Performances were not done with so many Hype Men, before Hip Hop turned so
Corporate. Today Hip Hop is in the ICE AGE (1997- Present) when rappers get signed
to major labels and are groomed to make dance music like Soldier Boy, Pop songs
like Timbaland, or talk about Jewelry, Money, Cars, and drug dealing. Common Ground
only mocks the Ice Age and does not glorify this negative machine like this. This
album brings a "Golden Age" vibe and cators to the FREESTYLE PHANATICS.