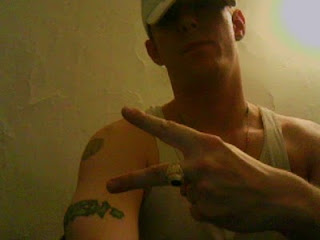 IMEEM is no longer the same, I added my IMEEM shit to the side of tha HOOD's pages here and how it's showin yall funny shit instead of the graphic we had for the past year or so. READ my blogs in here from 2007 and 2008 talkin about the many music websites that went out of business like www.mp3.com and you'll understand the comman theam & trend....

WHICH BASICALLY IS, IF U WANT LONGEVITY ON THE INTERNET, U must stay active because these sites is disappearing all CRAZY!

YOU CAN'T JUST BUILD a SITE and let it sit there, as a musician, U gotta stay Up on Your shit.

www.kwinmd.com went down due to funds,
same with the other 2 I made around that time paullove.net & Omegaredd.com

I had paid for mckomandoni.com until 2012 or some shit but I used YAHOO GEOCITIES to provide the pages to yall on all 4 of them domains (PL's, Kwin MD, mckoman doni, & Omega Redd's domains).

YAHOO 360 degrees is where I started THA HOOD.

THE BBS on Garageband is what inspired THA HOOD.

THE BBS on Garageband was a FORUM that was taken off Garageband site (U CAN'T view it now) it was called "GO BACKSTAGE" back in the day & from 2000-2007 I was the main one in the Garageband "RAP/Hip Hop " Forum.

I even copied there immature posts & exposed them again, for everyone to see to YAHOO 360 degree's pages I built (before Garageband took down the BBS) in my forum there called THA HOOD.

NOW, this is the only thing left holdin all the history.

THIS "ON REMOTE" Forum.

So I will be backing up all my blogs here (as I get the time to) so if BLOGGER goes histry (out of business) I can bring this shit back too.

ALL THESE SITES KEEP LEAVING BECAUSE OF THE ELECTRIC BILL (every website is being hosted by a computer server, serving that site to the world wide web, these clowns aint tryna keep payin the electric bill once they loose their sponcer cash)...

NING is my new movement from 2008, U can find most of the shit I did on NING now.

Fuck all the other shit, but if U want to know the histry of the internet for a ARTIST / MUSICIAN, read all the sites I had since the year 2000 in my blogs from NOV 2007 to somewhere in 2008 (when I started to focus more on the RADIO show & NING and less on Garageband Flavor of the Month and Blogs).

I gotta keep yall informed though, it's us against them (the one's who LIE like P.Diddy in that Notorious MOVIE or the white man's histry Lessons) I tell yall the str8 up truth yo!

I keep it the fuck funky!

I keeps it One Hunnit 4 cats!


THE BBS was erased because of me.
YAHOO 360 Degrees (might have been related to GEOCITIES and cuttin the costs of the electric bill to GO GREEN for YAHOO).


GREENGUY is ALL 4 the GO GREEN shit, I'ma EAGLE's Fan, I like savin money & smokin Green, and preserving electricity.

So I will be putting all my histry into a BOOK one day (to save electricity that these websites that are so pathetic, can't keep up on). And I will waite until the moons & stars align up just right so that the shit is not a wasted effort, get that book here to stay not like bitch ass IMEEM or GEOCITIES or BLOG's like YAHOO 360 degrees.


I am tryna build something here, I make sure it's built 2 last, fuck a wasted effort.

When it's ready, yall will see, I was here to help, not just grab a dollar like Lil Wayne or Jay Z, I am here 4 the cause, not the personal gain.

THAT's Y I gave U 4 FREE CD's on DATPIFF in the past year or whatever.

THIS IS Y we do this shit, not 2 put money in our pocket we aint runnin GAME on U or PIMPIN YALL LIKE HOES, we hussle hard 4 ours, we survive ourselves doin our own thing, we give yall this because we LOVE THIS RAP THING WITH A PASSION.

If U don't understand that, U aint here 4 the same reason.

GOOGLE SEARCH the MCs that came & went like 1 hit wonders over the past 30 years or so from A-Z you will see Ashes & dust.

I am here to BRING yall the type of shit that impacts the world 4ever.

So yall part - time what evers will B lost in the matrix, I am here to put my footprint & my finger print in the soil.