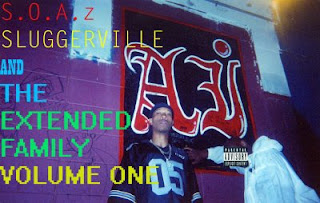 "S.O.A.z, Singutter, AND THE EXTENDED FAMILY VOLUME ONE" Is coming out real soon. CLICK HERE TO VIEW MORE PICS....

1 "We Ride Remix" created by Singutter of Sluggerville studio 7, Featuring 2PAC and Rihanna.....Watch the Video on the YOU TUBE....

13 "I Got everything I wanted" Emcee Lo Down

15 "Throw Down" recorded in Richmond, Va in 2001 before that Vocoder became such a Fad.

Eyesometrik, and rapped on by: Kwin MD

20 "Across the Map" Produced by Va'Les and his cuz Willy from Philly Rapped on by Kwin MD F/ the voices of Lil' Debo Aka Desent and Dr. Fa-Q

21"Got it the Best" by Harvard Blue