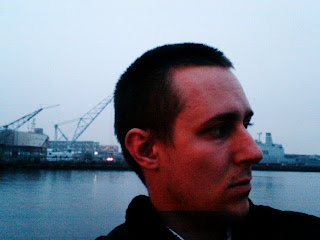 Well for the last 2 months Kwin MD (above) aka: Greenguy or McKoman Doni & Omega Redd (pictured in the previous post) have been working on the new album they plan on releasing sometime soon called "Andromeda". The concept involved the idea that this is the closest galaxy able to be seen with the naked eye. This is because, Musically, the metaphor of Andromeda being the closest visit galaxy to be seen from earth with out a telescope can be compared to where we are going with the music. We are bringing a whole new sound, far from our normal style but not too far away that you need a telescope to peep the style.

M31 is short for Messier 31. There is mad Messier Galaxies. So many Messiers, they all are called M-this & M That....Like to give more Detail on Andromeda as a Constellation:

There are 2 stars in M31. I am gonna try to find a book written by Paul Hodge called "Atlas of the Andromeda Galaxy".

I was lookin for names of planets in Andromeda, to use in lyrics & skits & intros & shit. But after reading almost every source a college library has on this, all I can say is, at this point, the damn Galaxy or Constellation or whatever is just too far away for them to name any planets on it.

After Pluto, (And I know about this new debate on Pluto), I think they gave up on namin planets, all they have is star names. The Stars have names like Hotel Rooms or Dorms or Apartment #'s.... Like this one in Andromeda, must be in the projects, C410. That's the name of a star in Andromeda.

The Center of the constellation of Andromeda culminates at Midnight on September 18th every year.

Now the Concept of this album is told. I am posting most of this now because I might refer to it later & here I can't lose it, this paper, I could lose.

Me & Omega Redd talked about a Mix Tape Album to come out before "Andromeda" called S.O.A.z/Common Ground Present: "The Milky Way" and put out at least one new song for the "Milky Way" make a Intro & a Outro track on there explaining "Andromeda" & "The Milky Way" and it will in Music (through your listening & imagination) take you from Earth to M31.

"The Milky Way" will give yall what we took back on "Triple 2". We promised yall when we took "Triple 2" off the market we'd bring that music back in a more new & improved format. "The Milky Way" is gonna be the replacement for that. Songs that were on that album might show up on the "Milky Way" and we will have "The Getaway" on there. We want to give yall for one last time a feeling of what The S.O.A.z & Common Ground were like (our usual style) before we go out to M31 on a spaceship.

So after "The Milky Way" album is released, we will have to travel 2.2 Million Light Years Away for the next album of "Andromeda". That's why they didn't name any planets there. It takes a long ass time for the light from those stars to get here. 168 million miles per second is how fast the light has to travel for us to see it here on Earth. George's Star aka Uranis & Neptune wheren't even named until just recently. Within the last 400 years or so. Pluto wasn't named until 1800 somethin... So All I needed to know to end my search on the name of a Planet there was that Pluto wasn't named until that time frame & Pluto is So many "Miles" away. They didn't find it until then (and by accident). That is Miles. Andromeda is 2.2 Million Light Years. Million Light Years is something much more far away then Miles. They can't see Planets that far (as far as I could research). They can find Stars. There are 300 Billion Stars in Andromeda. C410 is one of them.

So for The S.O.A.z to travel through 2.2 Million Light Years, we gotta take our time with the Math & Science on this na mean, we don't wanna put the laser beam on all wrong & end up cookin ourselves on the way there. We are Gonna travel far & wide on this.

With reality in mind, we are gonna travel far & wide. We plan on visiting Richmond Va to collab with Metaphysik & also traveling to California to collab with Indecent & Krypto. The "Andromeda" album might have more on it as well. We hope to surprise yall.

The Homie in New Hampshire Ziplok might also add some guest appearances. There so much more in store, I want to leave the rest secret.

We still haven't recorded the Bonus Track (#23) for "Golden Land" yet. We will have so much new music for yall very soon the whole thing would have gotten close to ready (As far as those Bonus Tracks & "The Milky Way") but our main Studio we like going to M.A.U. Computer was crashin on us the other day after we had a few vocal tracks layed down. We will surprise yall.

The May 2008 S.O.A.z Flavor of the Month supposed to been went up on Garageband but, the internet & me aint been find time for each other much these days, it's only the what 7th? I got it for yall, I'm thinking about changing to a differant song instead of the scheduled one though. The only thing that keeps me thinkin to put this on & not change it was that before Va'Les got locked up he kept naggin me about making this song a Flavor of the Month. Like every time I saw Va'Les we would talk about songs we'd make a Flavor of the Month & he would always say this was one he wanted as a S.O.A.z Flave. This was his first choice everytime. If I change it, & this song aint a S.O.A.z Flave by the time he gets out of the bin, he's gonna be heated. So I guess I should just make this a S.O.A.z flave now & stop playin before he gets out. Va'Les is my man I'm just messin around.